Pressure washing is a great way to clean up all kinds of messes. A pressure washing company will come out and assess the area that is to be cleaned and decide which method is going to work best. Pressure washing uses specialized equipment to clean off many kinds of substances. The pressure washer has a generator that is attached to a water tank that is ran to the end of a hose or nozzle. The nozzle can be aimed at the area that needs to be cleaned and pressurized water is emitted and used to clean. The pressure of the water is quite high and can be cold or hot water. The professional pressure washing company you hire will be able to determine the kind of water that will work best for your specific cleaning needs. Pressure washing is not just good for cleaning your deck and your walkways but it is great for other exterior cleaning such as removing zombie blood from a road in Hampton during the hit television show The Walking Dead.

Big Moose Pressure Cleaning Was Hired to Clean Zombie Blood from a Movie Set for The Walking Dead TV Show. 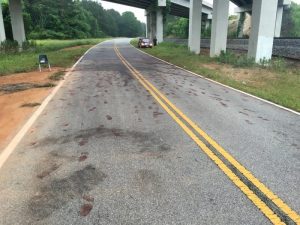 Pressure washing can clean zombie blood! Big Moose Pressure Washing was recently hired by the hit television show, The Walking Dead to come out to a filming location to pressure wash all the zombie blood that was left in the episodes wake. Although actual blood can be cleaned using pressure washing, in this case it was the makeup that is used to simulate blood that Big Moose Pressure Cleaning cleaned off the set. During filming, the fake zombie blood was splattered and trodden all over the road. The great thing about pressure washing is that any exterior area can be cleaned and the blood (real or fake) removed with this method. The fake blood is a simulation of what real blood would look like and even though it is fake it can still be quite hard to remove. Often included in the fake blood makeup is red coloring, corn syrup and other particles and debris that can be scattered around, as well as small balloons and explosive devices called squibs to create the illusion of blood sprays and splats. All of these pieces of debris are left after the shoot and will need to be cleaned up. The set in this case was a public road that needed to be restored back to the way it was before; so as not to alarm anyone passing by! A professional pressure washing service is the best way to get into all the cracks and crevices and leave the set of this episode looking better than ever!